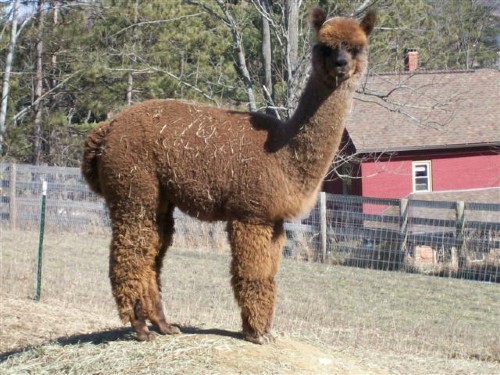 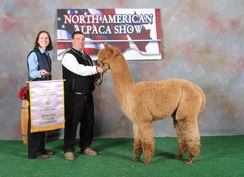 Ripple Effect was not much of a surprise really. What would you expect when you pair a Futurity Champion Male with a Legacy Gold Daughter? We expected a knock out with extreme longevity of quality and that is exactly what we got. This is very, very close to the exact same genetic crossings that created TKO’s King of the Ladies and we all know what damage he has done to the show ring! Even today at 4 years old Ripple Effect looks as good if not better than he looked at 1 year old. Virtually ...
More Details
Sold
Ask a question
Details
Certificate Histogram
This beautiful female is a prime example of what her sire, AML Legacy’s El Duro could create...Exquisite fleece - soft, high frequency, elite style crimp. El Duro "Pedro" passed in 2009, leaving a void in the genetic pool of truly elite herdsires. His offspring are left to carry on his lineage, and we believe Dolce is among the best. She is dense, dense, dense and has coverage down to her toes. Dolce’s Fleece Statistics from 3/12/2008 were: 16.4, 3.5, 21.3, 0.4. At four years old (2011) her AFD had increased to only 18.9....and yes, she is modern Dark Rose Grey!
Dolce has taken ONLY blue ribbons in halter all 4 times shown, as well as Color Champion at the 2008 Futurity, & Reserve Championship at the 2009 World Fleece Show, the Empire Fleece Event 2011, and again at the 2011 VAOBA Expo!
Dolce's first cria, Black Cherry Blossom is a stunning TB female sired by nationally recognized multiple-champion medium rose grey Premier’s Absolute. She was purchased by the Begoon’s at the MAPACA Jublilee auction 2012. A quality true black, in March 2011 she placed 1st in a class of 15 and was the youngest in the class!
Dolce’s 2012 and 2013 crias were sired by multi-champion Lancaster's Highland Chieftain. This pairing produced a beige male, Mojo, owned by Precious Farms, and a light fawn female, Sophia, recently purchased by Hope Springs Farm in WV.
Dolce's latest cria, Flash was born in July, 2015. Sired by Hilltop's Ripple Effect, his fleece has amazing density and structure. Dolce is currently open, so can be rebred to a male of your choosing.
If you are interested in purchasing her please MAKE AN OFFER and we'll talk!