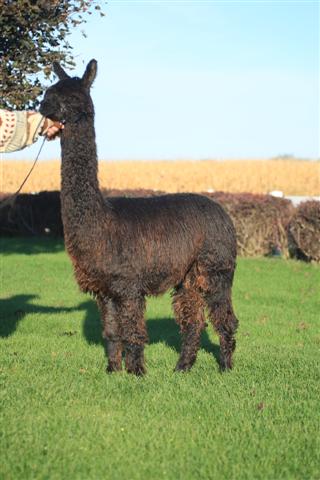 Loxias is a full Peruvian true black suri male that has inherited his sire’s mild personality and his mom’s Juno’s playful nature. His luster is off the charts, the handle of his fleece is slick and cool. His sire is Peruvian Millenium who has produced 100% suri offspring and is now deceased. His regrowth has remained lustrous and fine showing good density and uniformity. Loxias’ offspring have all been dark colored cria. He produced black when bred to black. His Paternal grand-dam was the i ...
More Details
Sold

Ask a question
Details
Certificate
Cantata is truly the most consistent, excellent production dam ever in our suri herd! She has given us 3 females and one male, all grey or black, and all quality! She is a lovely little bay black suri who took a 1st place at Nationals as a Juvenile, and has always received positive comments from the judges regarding her luster, density, hand and uniformity, as well as her conformation.
She is sired by true black reserve color Futurity Champion Psylent Knight, and brings in grey on her dam’s side. Her excellent pedigree includes Macgyver, Psylent Knight, Saladin and Gunsmoke.
WE ARE SELLING OUR SURI HERD AND HAVE DRASTICALLY REDUCED THE PRICES OF THESE QUALITY ALPACAS!
Cantata is currently not bred, but if purchaser desires, we would include a breeding to our lovely fawn Rewind son, Sundance.
Awards