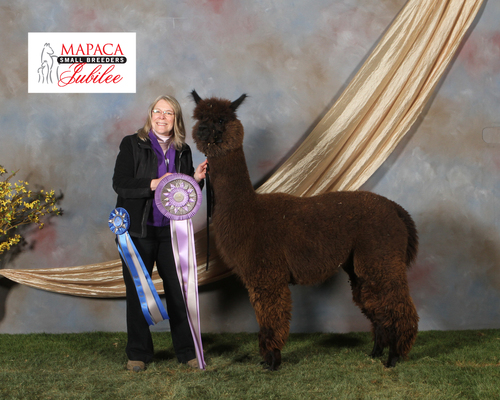 Ask a question
Details
Although a beautiful Champion female, unfortunate birthing circumstances have forced us to offer Mirabelle for sale as a fiber animal only. She has had three cria, and three dystocias. The first two were fairly minor, but the third was major, with the cria's head tucked down and under it's chest. We were lucky enough to get all of them out alive, but after the third one, Mirabelle had a retained placenta followed by a prolapsed uterus. With treatment Mirabelle is doing fine, but we've been advised by veterinarians that she should not be bred again.
We are grateful that we were able to get 3 beautiful offspring from her, 2 daughters and a son. She is a sweet girl with beautiful, extremely uniform fiber, so it's no problem to have her as a fiber girl for the time being.
About Mirabelle:
We were very fortunate to purchase Mirabelle at the 2016 Priority Auction from Amanda VandenBosch's amazing breeding program at Flying Dutchman Alpacas! For us she was the clear standout with her amazing phenotype and pedigree! In 2017 Mirabelle placed 1st at the MAPACA Jubilee and 1st and Reserve Champion at the MAPACA Small Breeder's Jubilee, AND she was almost 3 years old and had given birth to her first cria!
Mirabelle has presence and style and a fleece to die for! She has massive fiber coverage and a fleece that opens up with amazing alignment, density and crimp style. She has uniformity in her fleece from shoulder to rump and into her extremities, as well as excellent length of staple. She carries through as a modern dark rose gray which is no surprise when you look at her pedigree. With an AFD of 16.6 and CV of 18.3%, her fleece is extremely soft and bright!
Her dam is multiple champion Bisturi daughter, FDA Bisturi's Misturi Rose. Mirabelle's sire is true black Sgt Pepper, sold by Snow Diamond Alpacas to stand stud at Murztaler Alpacas in Austria. This combination offers amazing depth of color, fleece characteristics, style and proven genetics!

MIrabelle would be a wonderful addition to a small fiber farm!
Scientific Data
Awards 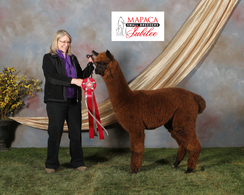 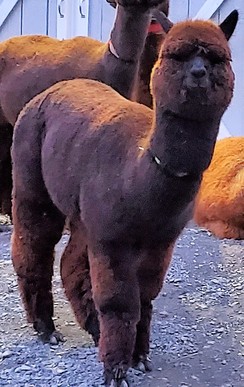